Cannes, France, 26 September – As part of their commitment to foster sustainable practices by cruise lines in the Bay of Cannes, the Mayor of Cannes, David Lisnard, the President of the CCI Nice Côte d'Azur, Jean-Pierre Savarino, and the Executive Vice President of Maritime Policy and Government Affairs, MSC Group, Bud Darr, today signed a charter to reduce the environmental impact of cruise ships.

The Charter, drawn up by Cannes City Hall and the Nice Côte d'Azur CCI, encourages cruise companies to join and participate in the programme by offering incentives for their actions to help to protect the environment.

Eight cruise companies – three major groups and five independent companies – have since 25 July, 2019 signed the ‘Cruise Charter’. By the end of this year, 93 per cent of cruisers visiting Cannes will have travelled with signatory companies, which represents 420,460 passengers. Companies that refuse to sign the charter will be banned from disembarking their passengers in Cannes from 1 January 2020 onwards.

This tripartite agreement between the Cannes City Hall, the CCI Nice Côte d'Azur – manager of the Old Port – and MSC Cruises pledges four environmental commitments to preserve the bay of Cannes and its exceptional ecosystem. Today’s signature, in the presence of Erminio Eschena, Director of Institutional Affairs and Industrial Relations of MCS Cruises, is a major step forward in terms of environmental stewardship.
As part of its unprecedented €11.6 billion investment plan, MSC Cruises, whose fleet will grow to 25 ships by 2027, is investing significantly in advanced, state-of-the-art environment technologies for its fleet.
Erminio Eschena, Director of Institutional Affairs and Industrial Relations, MSC Cruises said: “While our signature becomes official today, I am pleased to confirm that MSC Cruises has been a forerunner in the implementation of initiatives related to the environmental protection work in the Bay of Cannes. MSC Seaview, which has regularly visited Cannes throughout the entire summer season, already fulfils the four elements of the Charter. I would like to compliment the Charter’s quality, as it is fully aligned with the latest technological advances that the industry has developed.”
Patrick Pourbaix, Managing Director of MSC Cruises France said: "This signature is an obvious step for MSC Cruises, as Cannes is a key destination for our Company. Since 2014, nine ships of our fleet have visited Cannes and Villefranche-sur-Mer. In addition, nearly 70 calls are scheduled for 2019 and 2020. MSC Seaview will be positioned again between April 4 and November 7, 2020, performing weekly rotations."
The Bay of Cannes welcomes many cruise ships every year. To preserve the destination, protect the environment and enhance the Bay of Cannes, the Mayor of Cannes and the Old Port have invited cruise operators to join them through the implementation of strong environmental measures.
By signing this Charter, cruise companies are committed to the City of Cannes and the CCI Nice Côte d'Azur for calls that are respectful of the environment, going above and beyond national and international regulations.
Jean-Pierre Savarino, President of the CCI Nice Côte d'Azur, said: "The Charter that we have signed today is an important step as it reconciles economic development and environmental preservation. This approach must also be a win-win for all its participants: the City, the Port Operator and cruise lines. They will be able to benefit from an incentive on the harbour fees per passenger and by every call. Compliance with these commitments will also be regularly monitored."
The protection of the environment is a major issue for Cannes. Mayor David Lisnard plans from January 1, 2020, to impose the Charter’s standards to all vessels anchored in the Bay of Cannes, under penalty of being banned from being able to disembark their passengers.
MSC Cruises has embarked on a journey of continuous improvement to minimise the impact of its operations. The Company always seeks to explore and support the development of new marine technologies to preserve and protect the environment. 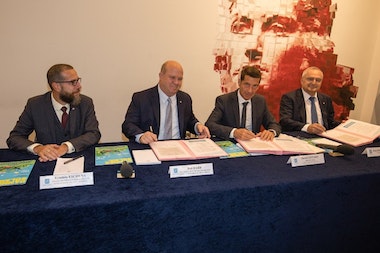