Kiel, Germany, 27 April 2019 - MSC Cruises, the world’s largest privately-owned cruise company, today inaugurated a newly equipped co-branded terminal and a dedicated berth at the Port of Kiel. As MSC Meraviglia marked her maiden call to Kiel, senior leaders of MSC Cruises and the Port gathered to renew their long-term partnership and agreed to ramp up the Company’s homeporting operations. As of 2020, MSC Cruises is due to become the number one cruise line at the Port.

MSC Meraviglia’s maiden call marks the start of a regular cruise schedule with turnaround operations in Kiel, where the ship is homeporting until September 2019. On a bi-weekly basis, MSC Meraviglia sails on two beautiful routes to the Norwegian Fjords via Copenhagen and Stavanger, and to St. Petersburg via Copenhagen, Helsinki and Tallinn.

Today’s maiden call represented a major milestone for MSC Cruises and the Port of Kiel, which came together not only to mark this occasion, but also to inaugurate a newly equipped terminal and berth. As the main cruise line at ‘Berth No°1 – Ostuferhafen’, MSC Cruises has customized the branding of both the terminal and the associated luggage area. A second gangway specifically for MSC Cruises is due to be developed in due course, helping ensure smooth turnaround operations.

To further reinforce their partnership, Pierfrancesco Vago, MSC Cruises Executive Chairman, and Dirk Claus, Managing Director and CEO of Port of Kiel, signed a Letter of Intent (LOI) laying out the brand’s future growth out of the Port. MSC Cruises will deploy two ships in Kiel from 2020 onwards, becoming the number one cruise line at the Port and enabling its growth across Northern Europe and the Baltic.

Speaking at the Crest Exchange Ceremony, Pierfrancesco Vago, MSC Cruises Executive Chairman, said: “This newly equipped, co-branded terminal and dedicated berth will enable us to achieve dramatic growth out of Kiel, which will become one of our key homeports in Northern Europe. We will consolidate our position as the cruise line with the second largest capacity deployed in Germany and Northern Europe while also becoming the number one cruise line in Kiel. Our long-term partnership will the Port will create plenty of opportunities for the City and the local community. We look forward to a bright common future.”
Sustainable development is a joint area of focus and, as part of the LOI, the Port of Kiel and MSC Cruises have agreed to analyse options to equip the dedicated berth with shore-to-ship power. As other MSC Cruises ships, MSC Meraviglia is equipped with is ready to receive power from local grids at berth, eliminating air emissions altogether.
Launched in June 2017, MSC Meraviglia is one of the more innovative ships at sea in terms environmental performance, having received the ‘8 Golden Pearls’ award from Bureau Veritas, which recognises efforts in eight particular domains of environmental protection. Among other solutions, she is equipped with a hybrid exhaust gas cleaning system, an advanced waste water treatment, systems for the prevention of oil discharge from machinery spaces and a ballast water treatment system.
MSC Meraviglia is due to reposition to North America and the Caribbean in September, where she will spend the upcoming winter season.
About MSC Meraviglia
• Entered into service: 3 June 2017
• Gross tonnage: 171,598 GT
• Maximum number of passengers: 5,714
• Crew members: 1,536
• Number of cabins: 2,244
• Length/Beam/Height: 315.3 m/43 m/65 m
• Maximum speed: 22.7 knots
• Percentage of ocean view/balcony cabins: 69%
• Awards: ‘Best New Ship’ in 2017, awarded by Cruise Critic UK 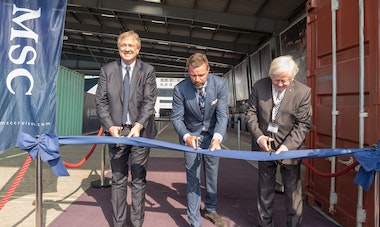