Geneva, Switzerland / Paris, France – 21 February 2019 – MSC Cruises, the Swiss-based world’s largest privately-owned cruise company, and Paris Saint-Germain, one of the fastest-growing football clubs in the world, announced a new partnership under which MSC Cruises will become the official and exclusive global cruise partner of France’s leading football team. The partnership between the two brands will last for three years and will be showcased throughout the seasons at Parc des Princes and beyond.

Commenting on the announcement, which was made in Paris at Parc des Princes, the official home of Paris Saint-Germain, Gianni Onorato, CEO of MSC Cruises, said: “For MSC Cruises, this is a truly exciting opportunity to join forces with the French football giants and a fierce European contender. It is part of MSC Cruises’ strategic focus in France, a key market, to build further positive brand association as well as introduce our distinctive cruise experience to new audiences in France, Europe and across the globe.”

MSC Cruises is the leading cruise brand across the whole of Europe as well as in the Gulf, South America and southern Africa and is currently in the midst of an industry-unprecedented 10-year, €13.6 billion investment plan, which will see 17 new ships coming into service over the 2017 – 2027 period. MSC Cruises has a presence globally and welcomes over 170 different nationalities on its ships.

Mr Onorato added: “The relationship with Paris Saint-Germain demonstrates our ongoing commitment to partner with world-class leaders. MSC Cruises and Paris Saint-Germain both have a culture of excellence, a strong global footprint, and as we seek to access new audiences in an engaging and relevant way, they are the perfect partner to help us.”

Marc Armstrong, Chief Partnerships Officer of Paris Saint-Germain stated: “We are delighted to welcome MSC Cruises to the Paris Saint-Germain family. We share core values such as striving for excellence and offering high quality and innovative experiences to our fans and customers.

Paris Saint-Germain and MSC Cruises are growing fast all over the world. The Club is now followed by over 65 million fans on social media and is especially focused on markets which are key to MSC Cruises, such as Brazil and Asia.”

The agreement was made during a milestone week for MSC Cruises, as the Company is preparing to take delivery of MSC Bellissima. The Company’s new flag ship, which was built in France and which will be launched in Southampton in a star-studded ceremony on March 2nd. 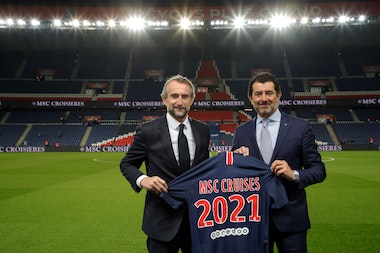