LEARN MORE ABOUT CORAL RESTORATION FROM PROFESSOR DAVID SMITH, CHIEF SCIENTIFIC ADVISOR ON THE MSC FOUNDATION ADVISORY BOARD FOR THE SUPER CORAL PROGRAMME

Firstly, can you talk through your role, specifically at the MSC Foundation Advisory Board for the Super Coral Programme?

I am a marine biologist who specialises in coral reef systems but who also has an interest in most areas of marine conservation. My responsibility at the MSC Foundation Advisory Board for the Super Coral Programme is to provide my experience on how we can secure a future for coral reefs. As part of the panel of experts working with the MSC Foundation, I am supporting this research programme specifically designed to develop expertise in the study and practice of coral restoration and resilience.  Our aim is to create a model that can successfully be replicated worldwide.

This is an important step in our commitment to implement a marine conservation programme that will help reverse the sharp decline of the world's coral reefs that threatens a quarter of all marine life.

Initiating large scale collaborative projects that seek to provide real solutions now, represents our best chance of securing a future for coral reefs and the livelihoods of the millions of people who depend on them. There are not many cases where you can say there is a real opportunity to do exactly this, so here we have a real window of hope.

Why is coral restoration so important? What role does coral play in the marine ecosystem?

Coral reefs are among the most diverse ecosystems in the world, serve as a food and economic resource for half a billion people and protect coastal communities from storms and erosion.  According to the UN’s Intergovernmental Panel on Climate Change, between 70-90 per cent of coral reefs are in danger of dying out between 2030 and 2050.

Coral reefs are among the most diverse ecosystems in the world and home to more than 25 per cent of marine species and protect coastal communities from storms and coastal erosion.

Healthy and diverse coral reefs are also an extremely important economic resource. For example and according to the National Oceanic and Atmospheric Administration, within the state of Florida which holds 84 per cent of US coral reefs, reef ecosystem-related spending has been estimated to generate more than US $6 billion in the five southern counties alone supporting more than 71,000 full- and part-time jobs.[1]

What is the role of Ocean Cay MSC Marine Reserve in coral restoration?

Ocean Cay is a former sand-mining site located in the Bahamas, 20 miles south of Bimini and 65 miles east of Miami, Florida. For more than half a century, millions of tons of the finest aragonite sand were extracted from the island and used for industrial purposes across the world. Mining operations ended in 2015 and the site was abandoned.

MSC Cruises shortly afterwards took on the challenge to transform this industrial wasteland into a flourishing marine reserve. The vision for the development of Ocean Cay was to recover its natural biodiversity and return its environment to as near pristine conditions as possible using both passive and active conservation techniques including coral restoration. Our approach first involved an extensive clean-up of the former industrial site to facilitate natural recovery. But in addition and due to severe depletion of key species, a coral nursery is being established on the eastern side of the island that will be capable of producing a local source of corals that can be located back into the environment surrounding Ocean Cay.

Importantly the corals that are put back into the environment must be carefully chosen to match the natural ecology of the site but also be best suited to survive predicted climate change. Science has shown us that some species are better equipped to deal with future climate change than others, and that some individual corals are more tolerant than others even when they belong to the same species. For example, for any given marine heatwaves there will be winners and losers – the winners being able to persist whilst the losers rapidly die out. MSC Foundation, in collaboration with our team of scientists and environmental experts, are identifying which species and which populations of these “winners” which we term as “Super Corals”, should be propagated within nurseries and put back into the environment to increase the resilience of Ocean Cays marine ecosystem.

How can research help in protecting coral reefs? What are the goals of the Super Coral Programme?

Research must be designed to develop practical, long-term solutions for the survival of coral reefs. The research at Ocean Cay will identify the best coral species and coral populations to use in our restoration efforts aimed at increasing the biodiversity and long-term resilience of coral reefs. Without this research or direct conservation action it is highly likely that we will lose the majority of coral reefs around the world and that society will have to face a future that does not include coral reefs.

Consequently the Super Coral Programme aims to research, develop, test and refine methods capable of reversing the long-term trend of coral reef decline in the 64-square-mile marine reserve around Ocean Cay.  This effort requires expertise from different disciplines, and we are delighted to be working with partners from the University of Miami Rosenstiel School and Nova Southeastern University to help design and implement the Super Coral Programme.

Ultimately research will identify and produce more of those Super Coral species that are best equipped to deal with environmental change.  Best practises in coral reef restoration will then be used to efficiently deploy those corals back into the reefs of Ocean Cay in a way that maximises positive ecological responses. All activities and outcomes will be carefully monitored, evaluated and ultimately reported so that lessons learnt at Ocean Cay can be used to inform other initiatives around the world thereby maximising the impact of the Super Coral Programme. At the same time we aim to show case our activities to visitors to raise public awareness and spread the message that the marine environment is in urgent need of help, but if we act urgently and with clear purpose there is hope.

Following the signing of MSC Foundation’s agreements with the University of Miami Rosenstiel School and Nova Southeastern University, the programme will now proceed to the implementation phase. We are currently finalising two extensive scientific reviews covering 1) the current status of marine ecosystems of Bahamas and how Ocean Cay compares, and 2) global coral reef restoration best practises and their potential use to enhance long term reef resilience. These reviews will help inform our direct conservation activities as well as our public awareness programme.

What will you do with the research and how will it benefit Ocean Cay?

Perhaps the most important component of our Super Coral Programme is the identification and testing of super coral species and how resilient traits persist in specimens that are relocated in to coral nurseries and ultimately located back out on to the reef. It is key that we understand how long resilient properties persist and whether or not these properties can be passed on to future coral generations. Coral restoration approaches of the future will depend on the outcomes of this research.

Excitingly we took a major step forward in realising these plans in November last year, when we held a ground-breaking for the new Marine Conservation Center that will be built on the island.  The Center will house research space with analytical laboratory equipment as well as internal and external experimental coral aquaria and all the equipment needed to support the running of research aquarium facilities. Our in-water coral nurseries are located immediately offshore from the new Center. Therefore, the center is a place of learning, education, discovery and production of super corals capable of increasing the long term resilience of coral reefs of Ocean Cay.

The unique access of the center to MSC’s Ocean Cay visitors provides a fantastic opportunity to raise public awareness of the plight of coral reefs and the immediate actions required to prevent their extinction. Partnerships with international scientific experts also means that our activities will be reported in scientific journals and thus help inform the wider academic and conservation community on possible solutions to reduce the risk of global coral reef collapse. 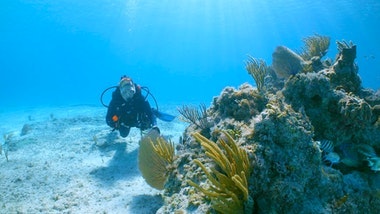