Miami, Fla. – March 10, 2022 – The Cruise Division of MSC Group broke ground today on its new mega cruise terminal at PortMiami, set to become North America’s largest once it’s completed. The new terminal will feature a four-story building capable of accommodating 36,000 passenger movements per day, and feature enough berthing space to serve three latest generation ships at once. Project completion is expected in the end of 2023, allowing MSC to further its presence in the North American cruise market and, more specifically, support in particular the continued expansion there of its contemporary brand MSC Cruises, the world’s fastest-growing cruise line.

Preparations for the Cruise Capital of the World’s new terminal have been underway since last July, when the Cruise Division of MSC Group and Fincantieri announced a partnership under which Fincantieri Infrastructure would build the state-of-the-art facility. It features a striking design by award-winning global architecture firm Arquitectonica aimed at adding a new layer of beauty to Miami’s iconic skyline.

The new terminal will accommodate the Company’s largest and most environmentally advanced cruise ships, including MSC Cruises’ newest flagship, MSC Seashore, and the line’s future LNG-powered World Class ships. Most ships deployed there will be ready to plug in to the local power grid at berth, in line with PortMiami’s plans to enable shore power connectivity.

Mayor Daniella Levine Cava, Miami-Dade County, said: “In Miami-Dade County, we are forging our way to the future with investments that will stimulate growth and expanded opportunities for our local economy. As our port continues to grow, the opportunities for our community—in jobs, contracts, and services—can only increase. The new MSC mega cruise terminal will simultaneously service three new-generation passenger vessels, potentially handling up to 36,000 travelers per day. This architectural wonder will allow the cruise line to deploy some of its most environmentally high-performing ships, including its new World Class fleet currently under construction. A big thank you to MSC Cruises and Fincantieri for their solid partnership.”

Rubén Rodriguez, President, MSC Cruises USA, said: “Our new terminal at PortMiami represents MSC Cruises' commitment to growing in North America and will help drive our expansion in South Florida and beyond. It’s also part of our larger sustainability goals, which include deploying our most modern and environmentally advanced ships to North America, the continued development of our one-of-a-kind Ocean Cay MSC Marine Reserve, and our pledge to achieve net-zero emissions by 2050. We’re proud of our partnership with Fincantieri, PortMiami and Miami-Dade County, and it’s a privilege to be able to contribute to the region’s continued growth and vitality.”

Claudio Gemme, CEO of Fincantieri Infrastructure, stated: “We are very pleased to be able to work with MSC, PortMiami and Miami-Dade County on such an ambitious project as the new terminal. It represents for us a significant result from a strategic point of view, because it rewards the choice to extend to new areas the skills acquired in the field of large infrastructures. When the works are completed, here in the world cruise capital, passengers from all over the globe will be able to admire the superior quality of our work even before boarding the ship”.

Aside from the terminal building itself, the new complex will include a multi-level parking garage for 2,400 vehicles, new road construction to ensure traffic flows smoothly, and a total of three berths capable of accommodating the largest of cruise ships. The Company will build two of those new docks; Miami-Dade County will construct the third. The project also involves the construction of related shore infrastructure, including water supply stations and four passenger embarkation decks.

The project reflects an investment of approximately $350 million.

MSC Cruises is the world’s third largest cruise brand as well as the leader in Europe, South America, the Gulf region and Southern Africa, with more market share in addition to deployed capacity than any other player. It is also the fastest growing global cruise brand with a strong presence in the Caribbean, North America and the Far East markets.

Headquartered in Geneva, Switzerland, MSC Cruises is one of the two brands that sit within the Cruises Division of MSC Group, the leading privately held Swiss-based shipping and logistics conglomerate with over 300 years of maritime heritage. MSC Cruises – the contemporary brand - has a modern fleet of 19 vessels combined with a sizeable future global investment portfolio of new vessels. The fleet is projected to grow to 23 cruise ships by 2025, with options for six more vessel orders in place through 2030.

MSC Cruises offers its guests an enriching, immersive and safe cruise experience inspired by the Company’s European heritage, where they can enjoy international dining, world-class entertainment, award-winning family programs, and the very latest user-friendly technology on board. To learn more about MSC Cruises’ itineraries and experience on board its ships, click here.

The Company’s number one priority has always been the health and safety of its guests and crew, as well as the communities at the destinations its ships serve.  In August 2020, MSC Cruises implemented a new comprehensive and robust health and safety protocol to become the first major line to return to sea. To learn more about MSC Cruises’ health & safety protocol, click here.

MSC Cruises has long been committed to environmental stewardship, with a long-term goal to achieve net zero emissions for its operations by 2050. The Company is also a significant investor in next-generation environmental marine technologies, with the objective to support their accelerated development and availability industry-wide. To learn more about the Company’s environmental commitment, click here.

Finally, to learn more about the MSC Foundation, MSC Group’s own vehicle to lead, focus and advance its conservation, humanitarian and cultural commitments, click here.

MSC Cruises' new terminal at PortMiami will be capable of hosting three latest-generation ships at once.
PNG 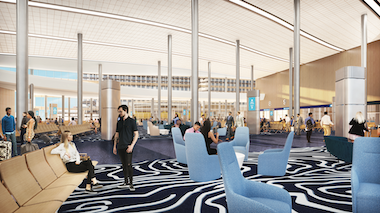 MSC Cruises' new terminal at PortMiami will provide a seamless guest experience for up to 36,000 passengers per day.
PNG 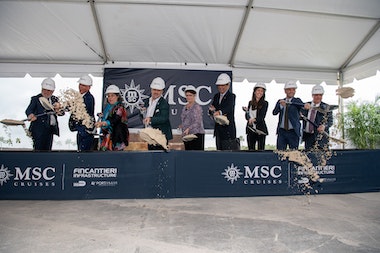