With just over one month until MSC Cruises’ new flagship MSC Bellissima comes into service, the Swiss-based world’s largest privately-owned cruise line has revealed today details of the all-star line-up for her glittering naming ceremony on March 2nd. The new addition to the MSC Cruises fleet will become the largest ship to be launched in Southampton. The event will capture the essence of the ship’s name Bellissima, meaning “possessing intense beauty, delighting the senses,” with a stunning array of live entertainment and performances awaiting guests invited from around the world.

MSC Bellissima will feature two brand new Cirque du Soleil at Sea shows, VARÉLIA and SYMA, and as part of the evening’s celebrations attending guests will be treated to a very special and exclusive Cirque du Soleil at Sea performance during the ceremony on the pier. This will be the first time that Cirque du Soleil, the world leader in live entertainment, has performed at the launch of a ship, providing a taste of what MSC Cruises guests can expect on board MSC Bellissima.
Hosting the evening’s proceedings as the Master of Ceremonies will be the glamourous English TV presenter and star of ITV, Holly Willoughby. Best known for her current presenting roles on ‘This Morning’ (ITV), ‘Dancing on Ice’ (ITV) and ‘Celebrity Juice’ (ITV2). She recently joined Dec in jungle for a once in a lifetime opportunity co-hosting last year’s 'I’m A Celebrity…Get Me Out Of Here!’. Holly will bring her trademark charm and wit as well as style and elegance to the stage.
Providing the live music for the evening and getting the audience on their feet will be none other than Rock and Roll Hall of Fame inductee and three-time Grammy Award-winner Nile Rodgers and his band Chic. His decades of danceable hits will definitely raise the roof and make this a memorable night.
No MSC Cruises naming ceremony would be complete without Academy Award-winning actress and MSC Cruises’ beautiful godmother Sophia Loren, who will perform the traditional ribbon-cutting and officially name the spectacular vessel, MSC Bellissima.
MSC Bellissima is the fourth MSC Cruises ship to launch in less than two years and will be closely followed by MSC Grandiosa in November. MSC Bellissima will feature some of the most innovative technology at sea with the introduction of the world’s first virtual personal cruise assistant ZOE, taking the connected cruise experience to the next level. Other highlights include a new specialty restaurant concept HOLA! Tapas from two-time Michelin-starred Chef Ramón Freixa, a new French specialty restaurant, l’Atelier Bistrot and a Chocolaterie and Chocolate Bar from the award-winning pastry chef and chocolatier Jean-Philippe Maury. The state-of-the-art ship will offer world-class entertainment, the stunning MSC Aurea Spa, outstanding facilities for families in partnership with LEGO Group and Chicco, the MSC Yacht Club as well as the iconic 315-ft. promenade with the longest LED sky screen at sea with a shopping gallery featuring over 200 brands.
MSC Bellissima will depart Southampton on March 4 to commence her 10-night inaugural cruise to Genoa. Beginning March 17, MSC Bellissima will sail 7-night itineraries in the Mediterranean calling at Genoa, Naples and Messina (Italy) Valetta (Malta), Barcelona (Spain) and Marseille (France)
To find out more about MSC Bellissima visit www.msccruises.com. 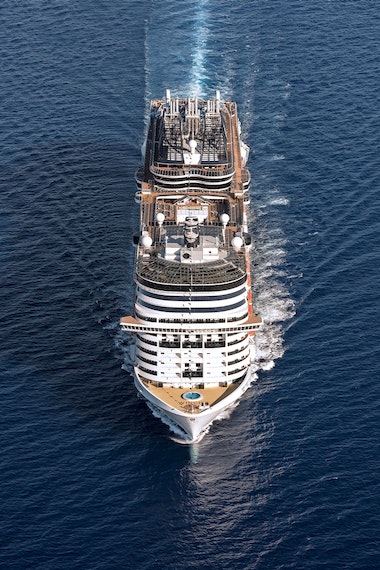