Effective immediately, long-time senior MSC Cruises executive, Roberto Fusaro, has been appointed President of North America. Over the past eleven years, Mr Fusaro led MSC Cruises’ business in South America to become the leading cruise line across the region. Fusaro holds an MBA from the University of Chicago, and is an industry veteran, having previously worked for other cruise brands, including out of Miami, prior to joining MSC Cruises in 2005.

Rick Sasso, after leading the MSC Cruises North America team for nearly 12 years and successfully positioning the Company for growth in the market – including the debut of one of the cruise line’s most dazzling ships, MSC Divina, to Port Miami, from which it now sails year-round to the Caribbean – will assume also with immediate effect the role of Chairman of MSC North America.

“This is an exciting time for MSC Cruises as we are in the midst of the second phase of our Company’s growth, which includes an industry-unprecedented eleven new next-generation smart cruise ships entering into service between June 2017 and 2026, for a total investment of €9 billion (US$10.2 billion),” said Gianni Onorato, Chief Executive Officer of MSC Cruises. “As we grow globally, North America is naturally more and more a strategic market for MSC Cruises. For this reason, we are thrilled to have Roberto take the leadership of MSC Cruises’ business in the region and work hand-in-hand with Rick to further our ability to capture the significant additional opportunities for growth that this market presents.”

“With the ultra-modern and beautiful MSC Divina home-porting in Miami, the revolutionary MSC Seaside to be christened in Miami in December 2017 and to also home-port there as well as the development of Ocean Cay MSC Marine Reserve – the most exciting new private destination ever built by a cruise line, it is clear that MSC Cruises is committed to the North American market,” added Roberto Fusaro, President of MSC Cruises North America. “I am honoured to have the opportunity to take on this new challenge and excited to work with Rick and the rest of the North American team as we look to further grow our business in the region and deliver a unique vacation experience to guests on board one of the most modern and elegant fleets at sea.”

Rick Sasso, Chairman of MSC Cruises North America, concluded: “I’m pleased to welcome Roberto to the team and am looking forward to working closely with him going forward as we enter the next stage of MSC Cruises’ growth in the North American market. I know what’s to come in the future will be even more impressive than anything we’ve seen yet.”

In 2014, MSC Cruises launched an investment plan to support the second phase of its growth through the order of two ships of the Meraviglia generation and two others of the Seaside generation (plus an option for a third) and in February 2016, confirmed the existing options to build a further two now Meraviglia Plus ships with an even greater capacity. In April 2016 this rose to €9 billion with the announcement of signing of the letter of intent to build a further four ships, each with next-generation LNG propulsion technology. Consequently, between 2017 and 2026 a total of up to 11 new, next-generation MSC Cruises ships will come into service. MSC Cruises is the first global cruise line brand to develop an investment plan of this length and magnitude, spanning an horizon of over ten years, from 2014 through 2026.

MSC Cruises feels a deep responsibility for the environments in which it operates, and was the first company ever to earn the Bureau Veritas "7 Golden Pearls" for superior management and environmental stewardship. In 2009, MSC Cruises began an enduring partnership with UNICEF to support various programmes assisting children worldwide. So far, more than €5m has been collected in voluntary guest donations. 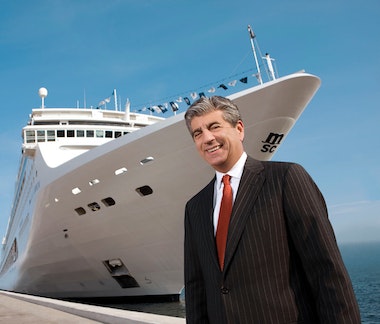