Saint-Nazaire, France, 31 May 2017 – Today at the MSC Meraviglia Flag Ceremony, where MSC Cruises took delivery of the latest next-generation cruise ship built by STX France, the two companies signed a new memorandum of understanding firming up the order of two 200,000 GRT, LNG-powered mega cruise ships, with options for two additional vessels. The four ships will become MSC Cruises’ World Class. The signing took place in the presence of Mr Emmanuel Macron, President of the French Republic, and Bruno Le Maire, Minister of the Economy.
In connection with the signing, MSC Cruises and STX France today also unveiled several key features of the World Class. Among other innovations, they will be equipped with a completely new generation of LNG-powered engines as well as a new generation waste water treatment system.
MSC Cruises’ World Class cruise ships will feature 2,760 cabins and a maximum occupancy of 6,850 guests, the highest passenger capacity in the global cruise fleet. The vessels, which will be delivered in 2022 and 2024 – the options are for 2025 and 2026 – will have a length of 330 metres and 47 metres of beam.
Speaking at the MSC Meraviglia Flag Ceremony, Pierfrancesco Vago, MSC Cruises’ Executive Chairman, said: “Today, as we unveil MSC Meraviglia, a new vessel that marks the start of the next phase of our growth, we are delighted to confirm another key component of our ten-year investment plan: the World Class. These new vessels will further expand our partnership with STX France all the way to 2026, with up to seven additional innovative ships to be built during this period.”
STX France's CEO Laurent Castaing commented: “Once again, MSC Cruises has chosen to put their trust in our capacity to support their growth and expansion as well as in our ability to conceive, develop and build the world’s most modern and technologically-advanced cruise ships. By adding the new World Class to the four previous ship classes that we have delivered over the past 15 years, the number of vessels in their fleet built by STX France in Saint-Nazaire is set to reach 20. Our exceptional industrial partnership continues to benefit an entire region.”
The World Class’ futuristic “Y” shape structure will enable panoramic sea views and increase the proportion of balcony cabins. The ships’ G bow (vertically positioned at a 90 degree angle) has been designed to improve stability, hydrodynamics as well as to enhance guest comfort. Other guest-centric innovations include family-friendly villages, a panoramic aft, and a glass pool lounge.
The announcement of the World Class was made as MSC Cruises officially took delivery of MSC Meraviglia. During the ship’s flag ceremony, which pays tribute to centuries-old maritime tradition, the Company’s newest flagship received her official flag and blessings for good fortune. MSC Meraviglia is due to set sail towards the Port of Le Havre for her christening ceremony on 3 June.
-ENDS-
ABOUT MSC CRUISES

MSC Cruises is the number one cruise line in Europe, South America and South Africa, and sails year-round in the Mediterranean and the Caribbean. Seasonal itineraries cover northern Europe, the Atlantic Ocean, Cuba and the French Antilles, South America, southern Africa, and Abu Dhabi, Dubai and Sir Bani Yas.In 2014, MSC Cruises launched an investment plan to support the second phase of its growth through the order of two ships of the Meraviglia Class and two others of the Seaside Class (plus an option for a third one) and in February 2016, confirmed the existing options to build a further two now Meraviglia-Plus Class ships with an even greater capacity. In April 2016 this rose to €9 billion with the announcement of signing of the slot reservation agreement to build a further four ships, each with next-generation LNG propulsion technology. MSC Cruises is the first global cruise line brand to develop an investment plan of this length and magnitude, that between 2017 and 2020 will have already delivered six new cruise ships.The MSC Cruise experience embodies the elegant side of the Mediterranean to create unique and unforgettable emotions for guests, through discovery of the world’s cultures, beauties and tastes.

More information at http://www.mscpressarea.com
ABOUT STX FRANCE
With more than 150 years of industrial history, STX France, which is 33.33% owned by the French government, offers its expertise in managing of large projects, from the design to the delivery and maintenance of highly complex vessels. In parallel with its shipbuilding business, the company also focusses on new Offshore, Renewable Marine Energy and Oil & Gas markets to help recreate value and return to growth dynamics, beyond its passenger ships building activities. More information on: www.stxfrance.com 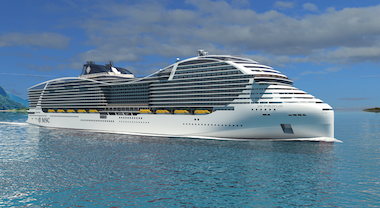