MSC’s Journey Towards Net-Zero Emissions By 2050

AS PART OF THE COMPANY’S JOURNEY TOWARDS NET-ZERO EMISSIONS BY 2050, THE CRUISE DIVISION OF MSC GROUP WILL HAVE SHORE POWER CONNECTIONS IN TWO NORTHERN EUROPEAN PORTS THIS SUMMER

Geneva, Switzerland, 21 April 2022 – Having made the pledge in 2021 to achieve net-zero greenhouse gas emissions by 2050, MSC Cruises is continuously exploring and investing in new technologies that are helping to decarbonize, some with very promising results. On this journey, minimising the impact of cruises ships on port communities and their environment while berthed is key.

Shore power plays a role to this end; it enables ships to turn off their engines and connect to local electric power to run their onboard systems. With electricity travelling to the ship through a specially designed transformer at the dock, this process prevents emissions produced from diesel generators, improving local air quality as well as reducing noise and vibration levels. The environment and the surrounding communities thus directly benefit from shore power technology. Following significant investments in its fleet capabilities, MSC Cruises has announced today concrete steps and commitments to adopt and accelerate the use of shore power.

Shore power ready for the summer in Southampton and Warnemünde

From the end of May throughout the 2022 summer season, two ships of MSC Cruises’ fleet will be consistently using shore power for the first time: MSC Virtuosa in the United Kingdom at the Port of Southampton’s new Horizon Cruise Terminal, and MSC Poesia in Rostock-Warnemünde, Germany.

Southampton is Europe’s leading embarkation cruise port, welcoming over 2 million passengers per year. It is also the first port in the United Kingdom to provide shore power for cruise vessels. Rostock-Warnemünde, for its part, is the largest shore power provider for cruise ships in Europe.

In both cases, close collaboration with local authorities based on shared interest has made the supply and use of shore power possible. From a practical side, MSC Cruises is grateful for the support provided by the port authorities to finish commissioning the equipment before being able to start using it systematically in a few weeks.

Linden Coppell, Director of Sustainability at MSC Cruises, said, “We look forward to using shore power in Southampton and Warnemünde throughout the summer season and we congratulate the port authorities for their forward-thinking and innovative commitment. We at MSC Cruises are continuously striving to improve our environmental footprint, and shore power allows us to do so by drastically reducing our ships’ emissions while berthed. We need more ports in other key markets in Europe to introduce shore power as quickly as possible thus joining our efforts towards net-zero emissions by 2050 and greatly reducing our local air emissions.”

An ambitious agreement with Cruise Baltic

On 5 April 2022, Cruise Baltic and MSC Cruises entered a Memorandum of Understanding concerning their joint efforts to contribute to use of shore power supply in the Baltic Sea Region. The MoU, signed in acknowledgement of the importance of reducing man-made air pollution, highlights a mutual desire to contribute to improving the cruise industry’s environmental impact.

By the end of 2022, 11 of MSC Cruises’ 21 ships – including all the new ships built since 2017 – will be fitted with shore power capability. Existing ships are currently being or will be retrofitted in the future as their itineraries take them to ports where shore power will be available.

With anticipated regulatory demands and local community concerns about air quality, various ports around the world are developing infrastructure to support shore power for cruise ships. However, according to CLIA, there are currently not more than 14 ports visited by their members fitted with shore side electricity capacity, while only 7% of cruise berths will be equipped by 2025.

Linden Coppell added, “We are committed to supporting authorities in developing shoreside power for our ships while in port. We have a clear and unequivocal position, that wherever shore power is available we will prioritise ships that have that capability. To ensure compatibility with the visiting ships’ systems, we are collaborating closely with port authorities and engineering companies in charge of the infrastructure design. Aspects, such as onboard energy demands and ship technical systems, need to be considered as part of shore side planning.”

In addition, wherever MSC Cruises is involved in building and financing new terminals, the Company ensures the designs take account of shore power requirements, providing the infrastructure, such as trenches for the power cables – current examples being the Cruise Division’s new terminals in Miami and Barcelona.

Determined to achieve net-zero emissions cruise operations by 2050, the Cruise division of MSC Group is investing in and supporting the accelerated development and implementation of innovative, cutting-edge technologies to be deployed across its fleet. Shore power is one example among other numerous progresses.

14 of MSC Cruises’ vessels have been fitted with hybrid exhaust gas cleaning systems, ensuring a sulphur oxides reduction of 98 per cent. By the end of 2022, the five newest ships will have selective catalytic reduction systems, which convert nitrogen oxides into harmless nitrogen and water.

MSC World Europa and MSC Euribia, which are currently under construction and scheduled for delivery in 2022 and 2023, respectively, will be MSC Cruises’ first LNG fueled vessels. Liquefied natural gas (LNG) is by far the cleanest marine fuel currently available at scale. It sharply reduces emissions from ships, significantly improving air quality, particularly for communities in port cities and coastal areas. LNG virtually eliminates local air pollutant emissions such as sulphur oxides by 99 per cent, nitrogen oxides by 85 per cent and particles by 99 per cent. In terms of emissions with a global impact, LNG plays an important role in climate change mitigation and the engines of LNG ships will have the potential to reduce carbon dioxide emissions by up to 25 per cent compared to standard marine fuels.

MSC World Europa will also be the first cruise ship deploying solid oxide fuel cell (SOFC) technology. This type of fuel cell is designed to generate electricity 20 to 30 percent more efficiently through a non-combustion electrochemical process when utilizing LNG compared to traditional marine combustion-based propulsion and auxiliary engines. When running on LNG, SOFC technology reduces carbon equivalent emissions by up to 60 per cent compared to incumbent propulsion sources, such as dual fuel diesel electric, and emits virtually zero harmful air pollutants like sulfur oxides, nitrogen oxides, and particulate matter.  Experience gained through the initial installation on MSC World Europa is expected to allow for scaling up future systems of this type.

In addition, the Cruise Division of MSC Group has initiated various partnerships with shipyards, energy providers, infrastructure companies, technology developers and academic institutions. These will allow further study on fuel cells, hydrogen-powered vessels and other emerging technologies that offer the potential to enable net-zero emissions ships. The Company’s ambition is to increasingly study and test these potential solutions through new-build and retrofitting programmes, to accelerate their development, help them reach maturity, and deploy them across our fleet.

Air Emissions: Selective catalytic reduction system that reduces NOx emissions by up to 90% when the ship runs on MGO (LNG offers a similar NOx reduction) – MSC Euribia will meet the IMO’s Tier III standards regardless of the fuel it uses

Shore-to-ship power connectivity, allowing the ship to switch off its engines and connect to local power grids at ports where this infrastructure is available

Energy Efficiency: All MSC Cruises’ newbuilds incorporate a wide range of energy efficient equipment that help reduce and optimise on board energy use. These include various technologies such as smart ventilation and advanced air conditioning systems with automated energy recovery loops that redistribute heat and cold to reduce demand. The ships use LED lighting controlled by smart management systems to enhance further the energy saving profile. MSC’s Fleet is soon completing the program of retrofitting automatic data collection systems on all ships for remote energy monitoring and advanced analysis, allowing real-time shoreside support to improve operational efficiency onboard. 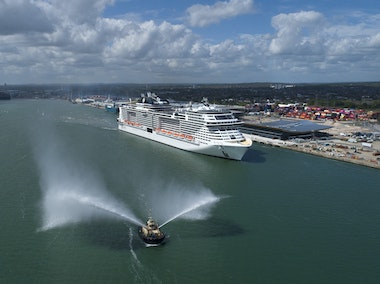