•    Ocean Cay has become a thriving and breath-taking habitat for guests to enjoy, full of indigenous species flourishing both ashore and in the surrounding marine environment
•    More than six nests and hundreds of sea turtle hatchlings have been identified on MSC Cruises’ marine reserve private island
•    While the successful coral restoration programme has transformed the waters around the former industrial site back into a rich marine ecosystem

London, United Kingdom, 28 September 2021 – Since August, MSC Cruises has been pleased to see hundreds of tiny Loggerhead sea turtle hatchlings making their way to sea from numerous nests that have appeared on Ocean Cay MSC Marine Reserve, the Company’s private island. These historic sightings are a culmination of MSC Cruises’ successful project to return the island and its surrounding waters to its former status as a thriving environment for indigenous flora and fauna. Over six nests have been identified so far and are being monitored on the island.

Ocean Cay MSC Marine Reserve, MSC Cruises’ private island in The Bahamas, is founded on a strong commitment to the conservation of marine life with 64 square miles of protected waters around the island. From its conception, the goal for Ocean Cay was to return the former industrial sand excavation site to its pristine beauty and to attract local species of fauna and flora both on land and in the ocean. Since it opened in late 2019, the island has progressively transformed into a lush tropical paradise with a rich marine ecosystem and proof of the progress of the conservation programme can be seen with the fact that Loggerhead sea turtle hatchlings have been observed making their way to sea from nests on the island.

Linden Coppell, MSC Cruises’ Sustainability Director, said: “We are all absolutely thrilled to see Loggerhead turtles come to Ocean Cay’s beaches to lay eggs so soon. This can take many years to happen with a newly restored ecosystem and we weren’t certain that they would come or when. We hope to see many more hatchlings in future nesting seasons and that these recent arrivals return to Ocean Cay when the time comes for them to nest.”

This year, once evidence of nesting was identified on the Cay, all nesting sites were marked and monitored regularly, in order to protect these vulnerable species and ensure their best chance of survival. Procedures are in place within the island-wide Biodiversity Management Plan to encourage turtles and assure their protection, particularly during the egg-laying season.

One of the priorities on Ocean Cay is the restoration of the coral, which as an integral part of the marine ecosystem, needs to be protected as they ensure biodiversity and protect coastlines.  The marine life around the island is thriving and the waters have become popular with Green, Hawksbill and Loggerhead sea turtles, with frequent sightings in the waters around the island. Ocean Cay is an important foraging ground for young sea turtles and hatchlings, when they frequent coastal habitats such as seagrass beds and coral reefs.

During the restoration of the island, a freshwater wetland was identified as an important ecological feature that supports the avian population. This was safeguarded and as a result, a number of different bird species have been seen on the island, including breeding pairs, a resident burrowing owl, and an increase in migrating populations.

Ocean Cay MSC Marine Reserve is a unique highlight of MSC Cruises’ Caribbean itineraries and every aspect of the island is being developed with the vision of creating a truly memorable experience founded in the core philosophy of the island – the discovery of nature. This sustainable destination offers activities allowing guests to connect with nature and plans are underway to provide opportunities to learn about the protection of the oceans and the importance of preserving coral reefs through dedicated edutainment programs. To find out more about Ocean Cay visit HERE. 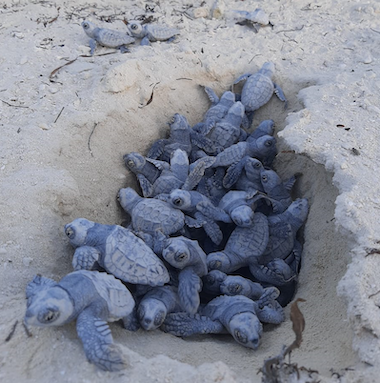