MSC CRUISES HERALDS ONE YEAR BACK AT SEA

London, United Kingdom 16 August 2021 - MSC Cruises today commemorated being back at sea for twelve months following the global industry’s shutdown in March 2020 as a result of the global pandemic.

One year ago, MSC Cruises on this day became the first major cruise line to resume operations for international sailings when MSC Grandiosa departed Genoa for a seven-night voyage in the West Mediterranean.

This re-start was down to a range of local, regional and national authorities in Europe sanctioning a Health and Safety protocol that MSC Cruises had developed with an external panel of medical and public health experts designed for the wellbeing of guests, crew and communities that the Company’s ships would call. A protocol that, eventually, set the standard for the industry and paved the way for more lines to restart.

Twelve months on and more than half of the line’s fleet is safely back at sea – sailing around the UK, both the Mediterranean Sea and Baltic Sea in Europe, North America and the Caribbean and the Red Sea in the Middle East. More ships are scheduled to resume operations in the coming weeks and months as part of the line’s phased plan for returning the full fleet to operations by next year.

Remarkably, MSC Cruises has forged ahead with its determined ambition for sustainable growth as it simultaneously returned ships to water.
For the line, the past twelve months were a very busy year of return to service but it retained an undiminished laser-focus on the long-term future of the business and in a sustainable manner. Below are some highlights from the past year at MSC Cruises.

Maritime
Two newbuilds delivered in the calendar year 2021.
No ships put up for sale.  No ships sent to the scrapyard.
MSC Virtuosa in February from the Chantiers de l’Atlantique shipyard in Saint-Nazaire, France (CdA).
MSC Seashore in July 2021 from Fincantieri in Monfalcone, Italy.
Steel cut in June 2021 for second LNG-powered ship MSC Euribia to be delivered in 2023 (CdA).
Keel laid in June 2021 for MSC Seascape to be delivered in November 2022 (Fincantieri).
Five-year preferential berthing rights deal signed with Cruise Saudi for Jeddah, Saudi Arabia

New Business
Luxury brand Explora Journeys launched in June 2021.
Also in June, cutting of the first steel of first ship Explora I for delivery in 2023 (Fincantieri)

Sustainability
On track to achieve decarbonisation target of a 40 per cent improvement by 2030.
Pledged commitment to have net carbon neutral operations by 2050.
Announced plans to assess feasibility of building hydrogen-powered cruise ship and the necessary supply chain in partnership with Fincantieri and Snam, one of Italy’s leading energy infrastructure companies. 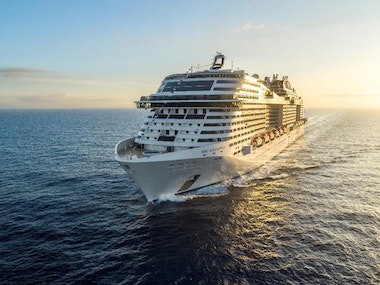