07/01/2021
•    After the forced suspension of operation over the holidays, starting on 24 January MSC Grandiosa will resume her scheduled weekly cruises in the Western Mediterranean departing from Genoa, Italy
•    On 14 February MSC Magnifica will also return at sea to perform her scheduled itineraries of 11-nights in Italy, Greece and Malta
London, United Kingdom, 7 January 2021 – As a result of the extension of the restrictive measures related to movement within Italy, as set out in the latest decree from the Italian government preventing access to and use of ports of embarkation until 15 January, MSC Cruises today announced that it is forced to cancel the cruises of MSC Grandiosa departing from Genoa, Italy on 10 January and, as a measure of precaution, to also cancel the cruise departure of 17 January. As a result, the first cruise of MSC Grandiosa following the temporary suspension of operation in connection with the implementation of these same measures during the Christmas and end-of-year festivities, will now depart from Genoa on Sunday 24 January.

MSC Cruises in August 2020 became the first major cruise line to resume sailing following the global shutdown of the industry in March caused by the pandemic ashore.
MSC Grandiosa, the Company’s flagship, set sail on Sunday 16 August from Genoa in Italy with guests on board for the first of her 7-night voyages in the Western Mediterranean.
This was achieved following approvals from the relevant authorities in Italy, Malta and Greece of an   industry-leading health and safety protocol designed to protect the wellbeing of all guests, crew and communities to be visited.
This industry-leading protocol, which was designed at the outset to adapt to a fluctuating health situation ashore, was recently strengthened in line with the current evolution of the pandemic in mainland Europe, with a series of enhanced rigorous measures.
The additional measures include the following:

•    Additional on-board antigen testing for COVID-19 of all guests mid-way through their cruise which are on top of the existing pre-boarding universal testing for all guests;
•    Frequency of testing of all crew during their time on board increased from twice-a-month to weekly, which is in addition to pre-boarding testing for all crew and other ongoing health monitoring measures;
•    Increased frequency of on-board sanitation, in particular of public areas and high touch points;
•    Tightening of the definition of close contact for tracing purposes, reducing the time that individuals are in contact from 15 minutes to 10 minutes.

The MSC Cruises protocol is based on nine key elements, many of which have been adopted by other cruise companies, the Cruise Lines Industry Association and international airlines and airports. 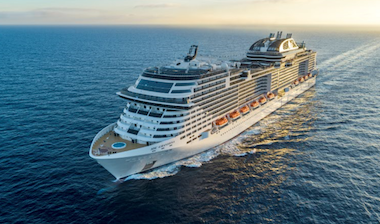