MSC CRUISES ON TRACK FOR APRIL 2021 RESTART IN JAPAN

MSC Cruises has become the first international line that operates in Japan to receive a health and safety certification from the country’s official maritime classification society ClassNK, a major step forward towards MSC Cruises’ operational restart in the country scheduled for April 2021.

The certification of MSC Cruises’ industry-leading health and safety protocol for Biosafety Management System (COVID-19) now paves the way for the line to open sales in December  to local residents for cruises homeporting in Japan and start to work with ports in the country to prepare for the forthcoming season.
Gianni Onorato, MSC Cruises’ CEO, said, “We are extremely pleased to have received this certification and are now confident that we will be able to restart our Japan operation serving the local market by April 2021.”

Junichi Hirata, ClassNK’s General Manager of Innovation and Sustainability Department, said, “This is the first important step of a longer-term plan for MSC Cruises to resume Japanese cruise operations in the first half of 2021, and we will now work closely with the line towards that goal.”

Hiroya Nakano, Director-General of City of Yokohama’s Port and Harbor Bureau, concurs and said, “It is great news that MSC Cruises has received this certificate of approval from ClassNK for its health and safety guidelines. The Port of Yokohama is committed to cooperate accordingly for the re-starting of international cruises in spring 2021.”

MSC Bellissima, which was launched in 2019, will be deployed to Japan, homeport in Yokohama to sail six to nine-night cruises in April, May and June 2021. She is also scheduled to operate in the country during October and November 2021.

Mr Onorato added: “To be the first international cruise line in Japan to be awarded this key certification of compliance is a further testament to our robust and rigorous health and safety protocol which led the way for the entire global industry when in August we became the first major line to resume cruise operation in the Mediterranean.

“We have now safely and responsibly carried more than 30,000 customers in the Mediterranean and can now look forward to offer the same for our guests who live in Japan.

“Our industry-leading protocol, as well as the unique sets of data gathered through the operation of our two ships calling Italy, Greece and Malta during the past few months, is currently being reviewed by authorities in other regions where the Company’ other ships are scheduled to restart.

“We believe, therefore, that this certification – in a country where the industry was at the centre of much attention very early in the pandemic – and the confirmation by authorities in Italy through their latest ministerial decree that cruising can continue, will go a long way to demonstrate the trust that we have been able to build with the protocol’s effective measures and their rigorous application for the benefit of guests, crew and the communities we serve.”
European classification society RINA last month awarded MSC Cruises with its biosafe ship additional class notation for the line’s flagship MSC Grandiosa which is currently operating in the Mediterranean Sea.

RINA had previously verified that the MSC Cruises health and safety protocol met and went beyond the high standards of the European Maritime Safety Agency (EMSA) and European Centre for Disease Prevention and Control (ECDC) Joint Guidance, which incorporates additional health standards including those from the EU Healthy Gateways Joint Action.

The verification that the protocol was aligned with the guidance of the two key European authorities was a crucial part of the process to enable the August restart of MSC Cruises’ operations in the Mediterranean. 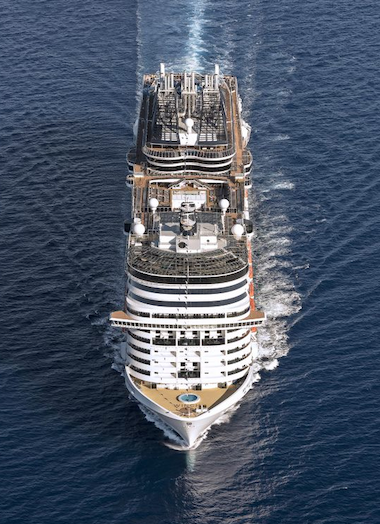