First, the two companies announced the signing of firm contracts for the construction of MSC Cruises’ third and fourth LNG-powered MSC World Class ships, to be delivered in 2025 and 2027. The first of the initial two ships in the class is currently under construction at the Chantiers de l’Atlantique shipyard in Saint-Nazaire and is due to enter service in 2022. With 205,000 GT, she will become the biggest vessel operated by a European cruise line as well as the first LNG-powered cruise ship built in France. Compared to standard marine fuel, LNG decreases sulphur emissions and particulate matter by 99%, NOx emissions by 85%, and CO2 emissions by 20%.

These contracts represent a capital investment by MSC Cruises exceeding EUR 2 billion and are expected to generate 14 million additional working hours, amounting to over 2,400 full-time equivalent jobs for the next three and a half years directly supported by those orders. Today’s signature also allows the shipyard to start working with the hundreds of suppliers and subcontractors involved in the projects, setting in motion a new cycle that will greatly benefit the French economy.

Today MSC Cruises and Chantiers de l’Atlantique also extended their partnership over the next decade with two additional projects. First, the companies signed a memorandum of understanding (MoU) for the development of yet a new prototype class of LNG-powered cruise ships to operate under the MSC Cruises brand. For this project, MSC Cruises, the shipyard and other partners will focus on developing emerging environmental technologies in line with IMO’s vision for 2030 and 2050. The four vessels in this new class would represent a capital investment exceeding EUR 4 billion and an extra 30 million working hours for the yard, the suppliers and subcontractors involved in the project.

A second MoU sees MSC Cruises partnering with Chantiers de l’Atlantique in the development of yet another innovative prototype ship class concept with which they will explore opportunities that wind power and other advanced technologies could bring to passenger shipping.

The three agreements signed today represent an investment in excess of EUR 6.5 billion in the French economy.

Pierfrancesco Vago, Executive Chairman, MSC Cruises, said: “The three agreements signed today extend our investment plan up to 2030. They stem from an exceptional partnership, with Chantiers de l’Atlantique, that has already delivered 15 highly-innovative innovative cruise ships over the past two decades and will see many more vessels come to life at Saint-Nazaire’s docks in the next ten years. They also confirm this industry’s commitment to environmental sustainability, in this case helping the French national industry further position itself as a world leader in the development of next-generation technologies and other solutions.”

Laurent Castaing, General Manager, Chantiers de l’Atlantique, said: “We are really proud and happy to have built such an outstanding relationship with MSC Cruises, based on mutual trust and driven by the spirit of innovation. We are both committed to shaping the cruise of tomorrow and to developing ship concepts which go far beyond current environmental standards. Our companies have already been working together for twenty years and these new projects allow us to look enthusiastically to the future.”

MSC Cruises is strongly committed to achieving a zero-impact future by investing in the accelerated development of new energy solutions and environmental technologies that will allow that. On 1 January 2020 MSC Cruises became the first major cruise line to achieve carbon neutral fleet operations. As today’s most advanced environmental technology alone is insufficient to reach that, while it works to minimize and continuously reduce its environmental footprint MSC Cruises is offsetting all CO2 emissions from its fleet that it is not be possible to abate through such technology through a blend of high standard carbon offset projects.

Headquartered in Geneva, Switzerland, MSC Cruises is the Cruises Division of MSC Group, the privately-held Swiss-based leading shipping and logistics conglomerate owned by the Aponte family.

An industry-unprecedented €11.6 billion plan will see MSC Cruises’ contemporary fleet increase from 17 to 25 ships by 2027. Additionally, the Company is investing an additional €2 billion in a yet-to-be-named new luxury cruise brand comprising four super-yacht ships, launching one per year between 2023 and 2026.

MSC Cruises’ fleet is one of the most environmentally-advanced in the industry. The Company is committed to environmental stewardship and works to minimise and continuously reduce the environmental impact of its fleet both while at sea and ashore as well as investing in the accelerated development of next-generation marine and environmental technologies. With a long-term goal to achieve zero emissions, in 2020 MSC Cruises became the first major global cruise line to offset 100 per cent of its ships’ carbon emissions that cannot be abated through currently existing environmental technology.

Learn more about the Company’ environmental stewardship practices at www.msccruises.com/sustainability.

With 150 years of expertise, Chantiers de l’Atlantique is one of the market leaders worldwide for highly complex ships and offshore metal marine structures, thanks to state-of-the-art industrial facilities and renowned expertise in designing, integrating, testing, and delivering turnkey maritime solutions. www.chantiers-atlantique.com 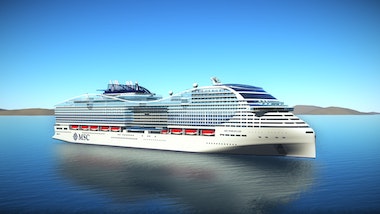